SWN-001: Bass (known in Japan as Forte) is a robot from the Mega Man series and one of Dr. Wily's creations. He first appeared in Mega Man 7 as a recurring boss character, alongside his robotic canine partner Treble (known as Gospel in Japan), and later as both an anti-hero and playable character.

Bass is a Robot Master created by Dr. Wily designed with the intention of creating a robot powerful enough to be on Mega Man's level. Bass is very confident and prideful, his goal is to defeat Mega Man at any cost and become the strongest robot in the world, which eventually puts him at odds with Dr. Wily himself. Seeing Bass as a failure, Dr. Wily then creates Zero with the intention of destroying both Bass and Mega Man. Like with Mega Man and Rush's Rush Armor, Bass and Treble are able to perform a technique known as the Treble Boost, where Treble is able to morph into a suit of flying armor with whom Bass is able to temporarily fuse with.

In M.U.G.E.N, Bass has been created by ChAoTiC for the Super Marvel vs. Capcom: Eternity of Heroes and Mega Man: Robot Master Mayhem M.U.G.E.N projects.

Bass plays like a Marvel vs. Capcom character, Bass does not have a projectile as his heavy punch, instead, he has it as a special move. His specials consist of a flip kick resembling the Flash Kick, three buster blasts, a bigger blast, and teleportation. His Hypers are firing rapidly, firing a big beam, using the psycho crusher and fusing with his dog Treble. 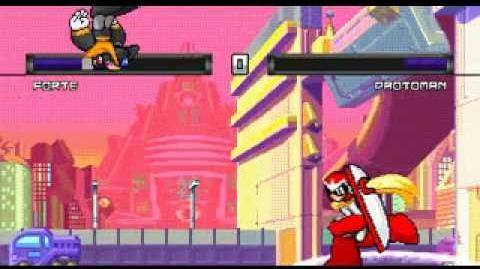 Forte vs Poison-1405728187
Add a photo to this gallery
Retrieved from "https://mugen.fandom.com/wiki/Bass?oldid=378815"
Community content is available under CC-BY-SA unless otherwise noted.