Not to be confused with M. Bison.

Bison is an original character made by Coelasquid and P.O.T.S., who serves as a parody of the primary antagonist of the Street Fighter series, M. Bison (known as Vega in Japan). The character itself is a cartoon bison that wears M. Bison's signature cap and speaks some of M. Bison's lines from the American animated series in a deep voice.

Unlike M. Bison from the Street Fighter series, Bison doesn't use any attack or specials moves from his namesake, but instead attacks in the style of an actual bison (eg, charges, rams, etc.). His health is higher than average, which comes in handy since he has no way of defending himself from attacks. He deals around the same amount of damage an average M.U.G.E.N. character deals, but due to his size and weight, he is immune to most projectiles and his enemies' attacks merely slow him down. His A.I. isn't that hard, making Bison a suitable opponent for beginners. 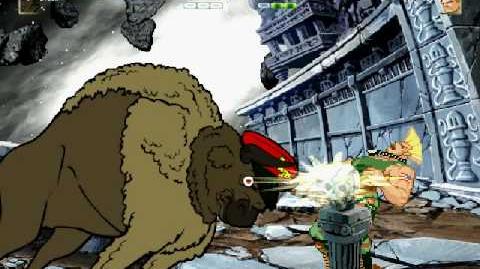 MUGEN This is Delicious!! (Literal Bison vs Guile)
Community content is available under CC-BY-SA unless otherwise noted.
Advertisement