MUGEN Database
Register
Don't have an account?
Sign In
Advertisement
in: Characters that have not been edited, Character versions, Low-res Characters,
and 4 more

Sure, you might be good at fighting, but do you have what it takes to dance? This minigame might not come with its own music nor sync up to existing stage music very well, but it can still be surprisingly challenging to keep a note streak going.

Catwalk is a bonus game that cannot be directly controlled by the player in any way when playing as it. However, when facing Catwalk as an opponent, it uses either the

buttons to play, depending on its settings.

The objective of Catwalk is to hit the buttons that appear on screen at the right time; that being when the buttons overlap the green line at the top of the screen. If the player misses a button press or presses the wrong button, they will lose some life. Life can be slowly regained by hitting a string of buttons, known as a "chain" in-game (not to be confused with chain attacks). The player must survive for a given period of time as indicated by the "TIME" bar at the top of the screen; this defaults to 60 seconds.

Due to technical limitations, Catwalk's note chart does not map to any particular song or stage, nor does the character come with music. This also means the chart's length is determined by a timer rather than the length of a given song, and is charted semi-procedurally. The chart's speed starts at a default rate, but increases for every chain of 50 notes successfully hit. If a player breaks their chain, the speed reverts back to the default.

Catwalk has a configuration file, CONFIG.txt, which contains a few options that can be adjusted to make the game easier or harder. BASE SPEED is the default speed of the chart, Use X Y Z toggles whether or not to include the

buttons in the chart, PENALTIES ON/OFF toggles whether the player should be punished for pressing the wrong button, ARROWS POSITION aligns the directional button icons to the left-hand side of the chart, and KEY LIMIT limits the number of notes that can appear simultaneously.

This character is controlled solely by the A.I. Though activation coding is present, it is impossible to input any commands. 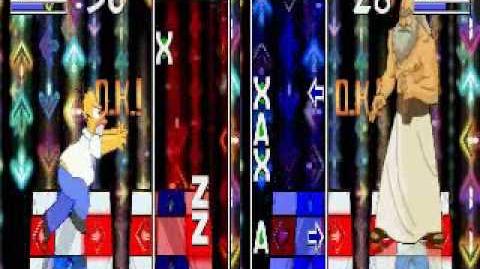