Daniel Gajardo Pulgar is a M.U.G.E.N self-insert character created by Daniel9999999. On the first release, he wears mostly neon green wardrobe. As the early Daniel progressed, he got subsequently more detailed. The final version of his MSPaint-drawn self was never released on a completed standard and has since been abandoned, with no support nor updates to him in any near or far future. There is also a version of Daniel named EX Daniel that came with a separate def file inside Daniel's folder, but this was removed at one point due to priorities in development and more attention in to the character itself, thing that would become a basis for his "Explosion Moment".

There is also a new version of Daniel, with basically everything being improved as well as a lot of stuff being removed. He also has a new look. Daniel's look consists of brownish-red hair, a green cap (Not on the side of his face any more, but rather in an odd angle), a green jacket, and blue pants (Although Daniel normally wears all green, the reason for the pants was technical, so new palettes with different jacket and pants combinations could be created). The reason for Daniel's re-release was said by Daniel9x7 himself, that DarkDonald1 was the person who reminded him that Daniel was worth bringing back.

He had been updated on January 5th, 2012 for a supposedly "final" release which has a couple of new moves, graphical updates, and a little few gameplay gimmicks. He then released his V2 sometime in January 2013, which is improved, and has more variety of attacks, including Burst Mode, Mojo Meltdown and also keeps some of his old moves like Punch Smash,Kick Smash and Skyrocket. After a little feedback message he fixed a few remaining problems and released the now final V2.1, which is, according to the author, the version people should have if they want to play as Daniel. Left over or removed ideas from this character would later resurface into other of his creations.

Daniel is a 6-button character. Its style is sort of hard to describe, as it is a mixed custom style, altogether with its own Hit Score system which is used to trade hits with its Slot Machine for a few effects and purposes; it also has a Desperation Mode which allows its to move much faster with an extra 20% of damage boost. It can also aerial rave and has a "freestyle juggling system", which allows it to chain many air attacks, as long as they don't overload the "Limiter System", which allows it to juggle the opponent freely until it reaches 100 or more during certain hits of it attacks, at which the opponent is sent flying uncontrollably, but also invincible. Some Hypers react differently to this rule, some reacting on the last hit, some others reacting instantly. Daniel also relies heavily on OTGs and ground bounces, which allows it to extend combos.

Every hit Daniel connects successfully, (except projectiles and some attacks not caused directly by it) causes Daniel to gain 1 Hit Point into its counter (unless the slot machine is grayed out or it is causing an effect). It is not necessary to play the slot machine, but if you get at least 10 hits and you're not getting hit, you can always press

to roll it any time. The outcomes are different depending on what you get.

Daniel, Koa, Sheliss = Slow life increase, Maximum Power and 90 Hits on the hit counter. (Unless you already have over 90 hits)
Koa x3 = 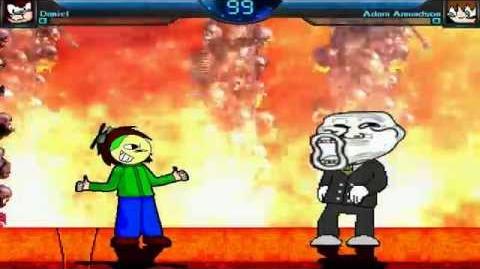 SS Daniel MUGEN 4 - Your time has run out, Adam
Add a photo to this gallery

Retrieved from "https://mugen.fandom.com/wiki/Daniel?oldid=384218"
Community content is available under CC-BY-SA unless otherwise noted.