Dee Bee Kaw is an original character created by The_None. Dee Bee Kaw is essentially a headswap of another M.U.G.E.N character called Eli by XCB, but was given permission by XCB to do this. Despite the similar appearance below the head region, Dee Bee Kaw has several original moves and different gameplay, making him very different compared to Eli.

) and has a fast and crazy fighting style. His A.I. is difficult, he exploits all of his abilities and this allows him to perform massive combos if you let your guard down.

One of Dee Bee Kaw's unique abilities is that he has an unique juggle system that will only allows you to juggle with moves you have yet to juggle into. (Hypers are exempt from this rule). The juggle system will treat far and close variants of a basic attack as the same move, however, it will count ground and air variants of a special attack as an separate attack.

Dee Bee Kaw has EX versions of 4 of his moves, which include Rising Grandpa, Pro at Bo, Gen'ei Kyaku (both ground and aerial), and Maherl Bomb, with each of them using 1000 Power. It also has a Neurotic Gauge, which randomly changes his basic attacks. The alteration can go both ways, which makes it a double-edged sword, and would mess up combos for the unprepared. The randomization takes effect when the gauge is in the yellow level, and rises every time Dee Bee Kaw attacks, gets hit, and combocount on either side affects how much said gauge would rise. Grab Some Pillz resets the Neurotic Gauge. Giving another reason to do so, the neurotic gauge also doubles as a dizzy mechanic, so eating a large combo with the gauge almost close to the max is guaranteed to make Dee Bee Kaw vulnerable for a similar beatdown. Resorting to other methods of attack evasion (Tasmanian Dodge) or even focusing on punishing attacks are recommended when in a pinch.

Such cause has given him the Guard Crush, which culminates in his limited capabilities to block. Dee Bee Kaw can only guard a limited amount of hits in a relatively short span of time. The only indication of when a guard would break is a brief flash of an either red or yellow icon, depending on how close you are to getting crushed. Guarding too many attacks would break your guard by making his arm fall off (leg if he's crouch-guarding), which would be nothing compared to the potential combo Dee Bee Kaw would soon receive thereafter.

This edit of Dee Bee Kaw adds additional moves, as well as altering some of the already existent ones. The Neuro and Guard bars have been "fixed", a hyper combo K.O. background has been added, and additional palettes have been included. 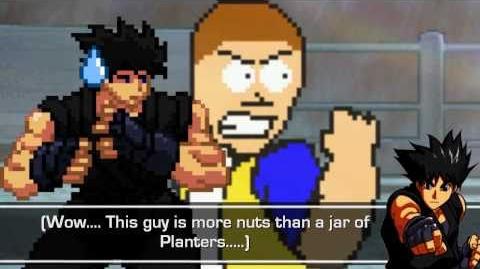 Retrieved from "https://mugen.fandom.com/wiki/Dee_Bee_Kaw?oldid=368960"
Community content is available under CC-BY-SA unless otherwise noted.