Flat Zone is a stage from Super Smash Bros. Melee based on the Game & Watch series of handheld LED video games. As its name would imply, Flat Zone is completely 2D and set inside what looks like the Game & Watch game, Helmet; following suit, the combatants also become 2D and make beeping sounds whenever they move.

In M.U.G.E.N, Flat Zone has been made by NeoKamek, Dfalcon and Medrops. NeoKamek's version appears to be a screenshot of the stage from the game itself, while Dfalcon's and Medrops' versions use a custom-made sprite from The Spriters Resource.[1]

Superflat World: Flat Zone appears to be a scaled up and colour-lossy screenshot of the Flat Zone stage from Super Smash Bros. Melee, which has then been split into two separate sprites so as to achieve the source game's effect of having the console sections of the stage layered in the foreground; naturally, this will obscure characters who walk into these sections on the top and side areas of the stage, the latter of which can grant both situational advantages and disadvantages to thinner characters. Though the stage would appear to be a completely static image made up of the two sprites, there is actually a manhole platform that eventually starts appearing and disappearing between the static platform and the house on the right, but because it takes three minutes for said platform to first appear, it is unlikely to ever show up in a typical match. The stage's camera is configured to try and keep combatants as central as possible, which is achieved horizontally by ramping up the tension value to 120 so that the camera moves if a combatant tries to move forward beyond the centre, and achieved vertically by setting the zoffset to a value that significantly raises the stage floor and floortension parameter to zero so that the camera will scroll up with any vertical character movement. 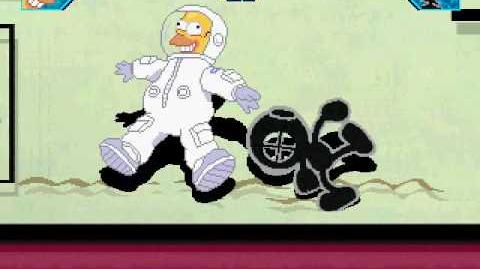 Dfalcon's flatzone uses a custom Flat Zone sprite from the Spriters Resource that somewhat mimics its appearance in Super Smash Bros. Melee, as the platforms typically associated with the stage have been edited out of the sprite, instead being replaced by a two frame low-res Mr. Game & Watch sprite ringing his bell; that being said, it still has sections at the top and sides of the stage where the Game & Watch console is layered in the foreground, so combatants that venture into those areas will end up being at least partially obscured. Due to the small size of the original sprite, the stage itself is lacking both in width and height, with the obscuring foreground element around the top and side edges making the stage feel even smaller by reducing the total area where combatants are visible.

Medrops' Flatzone is a custom sprited stage that mimics its appearance in Super Smash Bros. Melee, complete with areas at the top and sides of the stage where the Game & Watch console is layered in the foreground, which obscures the view of combatants that venture into them. Like in source game, there are various Game & Watch characters who make appearances at periodic time intervals, such as the oil panic character who spills the contents of its barrel across the stage floor and the manhole characters who both hang from the preexisting background platforms and occasionally 'fill in' the gaps between said platforms; there are also the various tools that rain down upon the stage, though they can't cause any damage to the combatants. While the small sprites used for the stage make it relatively small to begin with, the obscuring foreground element around the top and side edges makes the stage feel even smaller via reducing the total area where combatants are visible; on top of this, the stage's zoffset value raising the stage floor to just over two-thirds of the way up from the bottom of the screen reduces the amount of that fighting area visible on the screen at any one time.