Goku (known as Son Goku in Japan) is the main protagonist of the Dragon Ball franchise, created by the mangaka Akira Toriyama. The character of Goku, as well as the original plot of Dragon Ball, are loosely inspired by the character of Son Wukong from Journey to the West.

Goku was originally a Saiyan born under the name Kakarot, the son of Bardock and Gine, and was sent to Planet Earth in a Saiyan pod just moments before his homeworld, Planet Vegeta's destruction and moments before Bardock's last stand against the tyrant Frieza. Goku was found by an old man named Gohan who became the boy's adoptive grandfather. He gave him the new name of Goku, as a baby, Goku's Saiyan heritage was clear as he was violent and rambunctious but that all changed one day when Goku fell down a mountain and hit his head, giving him amnesia about his Saiyan heritage and has since then strived to become the best and the strongest martial artist alive.

Numerous iterations of Goku have been created for M.U.G.E.N by various authors, although it could be argued that two most popular versions of the iconic Dragon Ball character are the ones created by CHOUJIN and Balthazar & Cybaster.

Stated to be "99.99% complete", this Goku is based on his appearance in the first Super Butōden game on the SNES, though with adapted controls.

While this version of Goku uses sprites from Dragon Ball Z: Super Butouden on the SNES, it plays nothing like said game, instead opting for the limited gameplay found in Tako's other characters. It can't combo, but has two Specials, both of which act like Hypers.

One of the most recognized and balanced Goku characters out there. It's interesting to note that this was originally a W.I.P by Ironmugen, but later given to CHOUJIN so he could make it into his own unique style. Son Goku was originally intended to play as a mix between Marvel vs. Capcom and Guilty Gear X, but little did CHOUJIN know that this style of character would form the basis of many future Dragon Ball characters.

With many custom elements and huge combo ability, it shouldn't be any surprise that the power level of this Goku is over 9000. Unlike many other Goku characters, this version is not overpowered in the slightest, though some may say different when they challenge its A.I. to a fight.

Being a JUS-styled character, this Goku has weak but long combos and very flashy effects. He's pulling out all the stops, being able to utilize every transformation from Super Saiyan all the way up to Mastered Ultra Instinct to defeat his foes in a spectacular fashion. With lightning-fast combos and lots of forms with many Specials and a Hyper (or two) each, Goku has many tools to defend the Earth with. 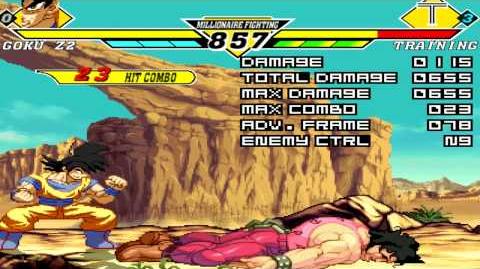 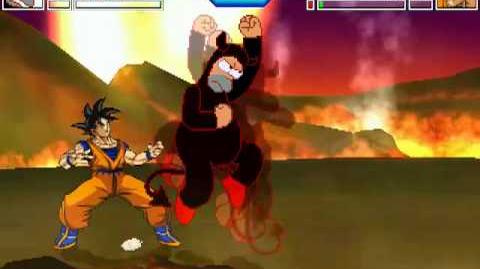