Taking to heart what was once said about hammers being untouchable, this strange little hammer comes from the depths of the fictional Tengogalax universe to bring a total lack of hurtboxes (and balance) to the battle. Hammuh ruthlessly attacks the opponent without moving an inch, grinning sadistically as its opponent suffers endlessly.

Hammuh is an overpowered cheap character that doesn't actually use any buttons at all, simply attacking automatically during its idle animation with an unblockable attack that covers the entire screen, effectively knocking the opponent out instantly; it is capable of movement, though the opponent would've already been K.O.'d due to the aforementioned unblockable full-screen attack prior to any directional buttons having been pressed, making movement pointless.

Hammuh does not have a custom A.I., but because the character attacks automatically without any need for button inputs, it does not need one. Due to how cheap Hammuh's only form of attack is and its own lack of collision hitboxes, it is impossible to defeat Hammuh with normal characters. 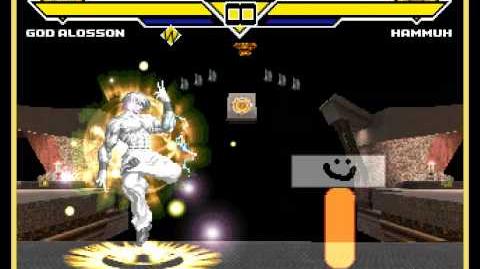