Homura Akemi is one of the main protagonists of Puella Magi Madoka Magica.

Homura is a Puella Magi which first appeared in the dream of Madoka Kaname and was later transferred to the school. Having seen many of Puella Magi die in battle, she tries to prevent the other girls to contract with Kyubey (especially Madoka). She can use firearms and explosives, but can also manipulate time.

In M.U.G.E.N, Homura Akemi has been made by Cycbeam.

Homura is an extremely powerful character if one learns to use them effectively, and is heavily projectile oriented while still not having some of the traits associated with other projectile-heavy characters. Several of her attacks are quick melee strikes, and others are fast, hard hitting ranged attacks with an RPG, mortar, or shots from a pistol or rifle. They can teleport instantly, allowing them to escape being cornered very easily, but have below-average durability. 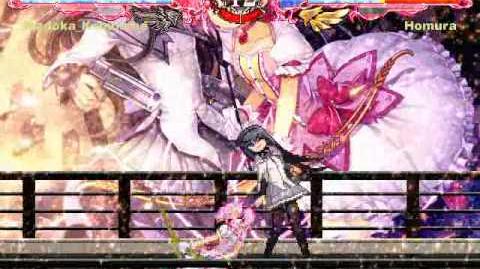