This page's purpose is to show you the basics of creating a stage article; the rest is up to you.

The first part is the name of the article. You have to name the article EXACTLY how the stage itself is named (besides the capital letter at the beginning of a title); this includes bad spelling/grammar unfortunately..."What if the stage hasn't got a name?" Well that's a pretty bad stage then :P

Now onto the article itself.

Similar to source character articles, the very first thing that should be on a stage article is the infobox, though the type of infobox used is the one that's exclusively for stage articles, as denoted by the template being named {{Infobox stage}}; the logic behind the stage infobox template is the same as the logic for character templates, the difference lying solely in the parameters that are required for it.

Name -- The name that will display at the top of the infobox; while this is usually the same as the article's title, some stages have names that differ from the source media name either out of the creator's preference for naming their work or because the stage's name is in a language other than English.

Caption -- A short snippet of text that describes what is happening in the image; the default caption text is '(Character A) fighting (Character B) on (Name of stage)', where Character A is player 1 and Character B is player 2.

Creator -- The name of the stage's creator, remember to link to the creator's article if it exists on the Database. It is important to note that the creator's name should be written exactly how the creator normally writes it, with proper capitalisation and letter/word spacing being taken into account.

Animated -- Either 'Yes' or 'No', depending on whether the stage has features that animate or not.

Music -- Either 'Yes' or 'No', depending on whether the stage comes bundled with music or the stage's creator has a separate download for it. If the parameter is 'Yes', a Background music section needs to be added to the article. As explained above, ignore any music that was not provided by the stage's creator.

Super Jump -- Either 'Yes' or 'No', depending on whether the stage's camera pans upwards enough so that most of a character is still visible after performing a Super Jump or not.

Resolution -- Either 'High' or 'Low', depending on the resolution of the stage.

The following is an example of how a finished infobox appears in the editor and on a article respectively, this one being Rave On's infobox:

The following section gives a general explanation as to the formatting of parameters for infoboxes where the article has more than one version of that particular stage, the parameter's functions are identical to those used in single-version stage articles, all of which are listed in the previous section: 'General parameter explanations'.

Name -- Exactly the same as the article name, regardless of what any of the individual stages are named as.

Creator -- Identical to what is required for the single-version infobox, with the only difference being the addition of other creator names. Names should be in order of when the creator created their version of the stage from oldest to newest, with all names being on the same line and having break tags separating them; If the amount of creators for a stage exceeds 3, write 'Various' instead of any creator names.

Downloadlink -- Practically identical to what is required for the single-version infobox, although there are some minor differences concerning how things are named as well as what order the links are listed; instead of the download link's infobox text being the name for the website that the stage is hosted on, it is instead the stage creator's name followed by 'version', this is to prevent confusion over which link belongs to which stage. Download links have a particular ordering to them, as links are listed from the oldest version of the stage to the newest version, similar to how creator names are ordered in the 'creator' parameter; stages with background music that is downloaded separately from the stage are listed right under their respective stage.

When it comes to stages that have been created more than once by the same creator, the infobox text for those links should be formatted as 'Creator's nth version', with 'nth' being replaced by first/second/third etc. depending on the ordering of when the creator released a particular version of that stage. Minor updates to any particular stage version by the stage's creator do not count as an additional version, however, if the updates are as such that the updated stage is significantly different from the original, treat the stage as a new version; stages made by the same creator are not grouped together in the infobox, they still follow the rules of links being listed from oldest to newest, for example:

Stage edits by different creators are handled similarly to separate background music downloads in the infobox, but are handled differently in regards to download link ordering; it should also be noted that instead of using 'version' to denote an edit, 'edit' should be used and the link text should be formatted as 'Creator's edit' or 'Creators first/second/third edit' if a creator has edited the stage more than once. A stage edit is listed under the link of the stage that it is an edit of and otherwise ignores the traditional listing of stages from oldest to newest, however, multiple edits of the same stage are listed in order of oldest to newest within themselves. If a stage has a separate link for background music, any links for stage edits are listed under this instead of the original stage, similarly, if any of the edits have a separate link for background music, that link is listed directly under the edit that the music belongs to.

Animated/Music/Super Jump -- Functions differently depending on whether individual versions of a stage have differing attributes, if all versions of a stage have animated elements, for instance, then this parameter is treated the same as it would be for single version stage articles; if some versions have animated elements while others do not, then both the 'Yes' and 'No' functions have to be placed into the infobox with a tooltip next to each that states which versions correspond to which function. When listing creators in the tooltip, it is only necessary to list the creators name and separating each name with a comma, list the creator names in order of when their stage was created (oldest to newest).

In the event that two stages by the same creator have different attributes, list the creator's name as usual, but state which version has that particular attribute in brackets.

Resolution -- Fundamentally the same as the Animated, Music and Super Jump parameters, but with 'High' and 'Low' instead of 'Yes' and 'No', depending on the resolution of the stages.

Applies to both single and multi-section stage articles.

For any stage version that comes with background music either bundled with the stage or as a separate downloadable file (and thus has the Music parameter in the infobox filled in as 'Yes'), a section is required for said version that includes the stage's music for people to listen to, similar to a 'try before you buy' setup that informs a user if the music is of good quality/to their tastes, or whether they need to head off to a certain video sharing website to find a higher quality version of that music/a different music that they prefer to have on that stage.

Next up is the piece of text that explains what the name of the music is and which media it originates from; for the sake of standardisation, all of these texts should start with:

It's clear as crystal that the most important part of the background music section is the actual music itself, however, the correct music to use is the one that either comes bundled with the stage or the one that is part of a separate download, regardless of the music's quality. This process would have been as simple as simply uploading the raw music file to the Database, were it not for the fact that the Database (and Wikia as a whole) only accepts audio files in Ogg Vorbis format (.ogg); fortunately, there is a way around this for files in different formats that won't cost any money, simply download and install Audacity -- an open source program that can cleanly convert files to Ogg Vorbis format (as well as loads of other audio related stuff) and follow these instructions:

Inserting the music into an article is a relatively simple process, it goes directly under the music description and is done in the same way that an image is inserted into an article, with the file extension obviously being .ogg instead of the extensions used for an image file:

An example of a finished product will look like this:

Which would translate onto an article as:

The music used is the battle theme for Gateway Colosseum from Pokémon Battle Revolution.

Videos are dealt with in the much the same way they are dealt with on character articles, however, seeing as one stage article may end up containing multiple versions of a particular stage [insert policy regarding how we manage videos on stage articles with more than 1 version here].

Although a videos section is a requirement on all stage articles, it is sometimes impossible to actually list at least one video owing to the possibility of a video not existing that contains that particular stage; when this is the case, put the {{Needvid}} template under the section header and remove the gallery tags, this will remind editors that should a video containing this stage be created in the future, it will need documenting in the article.

The finished section will look something akin to: 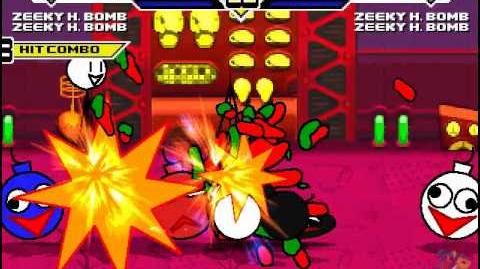 Vim Factory M.U.G.E.N (Download link in description)
Add a photo to this gallery

The first category that needs listing in the article is the all-important stages master category: Category:Stages, this category is what the Database looks for when a random stage is searched for using the navigation toolbar at the top of the page, as well as what bots look for when making important edits to all stage articles at the same time.

The next categories to list on the article are the genre/company/series categories, these are near identical the the character versions of said categories with the exception of the final word of the category being 'Stages' as opposed to 'Characters'.

The final category that can be listed in the article is the one that states whether the stage is only compatible with a certain M.U.G.E.N version, these categories are mutually exclusive, so only one of these categories is allowed on any particular article. The categories and their specific requirements are as follows:

Retrieved from "https://mugen.fandom.com/wiki/MUGEN_Database:Stage_articles?oldid=306139"
Community content is available under CC-BY-SA unless otherwise noted.