The Main Deck is the first area that Samus Aran ventures into while aboard the Biologic Space Laboratories research station during the events of Metroid Fusion. The Main Deck serves the purpose of connecting to other sectors of the station, as well as containing the living quarters for the station's crew members and the operations room that allows the flight course of the station to be changed; another part of the Main Deck is the Sub-Zero Containment room, a cold storage which houses the lifeless, frozen husk of Ridley.

Enscripture's first version uses sprites of the Sub-Zero Containment room and Ridley's frozen husk taken from Metroid Fusion, with the husk visible on the left side of the stage. The stage has some minor changes from its appearance in the source game, such as the floor on the right side of the door that would block access to Ridley being moved up so that the whole floor is level, as well as the door itself being being made taller instead of a piece of the ceiling coming town to meet the door halfway; the falling snow that's visible throughout the stage is also different from how it appears in the source game, as it falls slightly faster and has a smoother animation. Due to the nature of the sprites being used, there isn't a lot of horizontal space and extremely limited vertical space, as the camera does not follow a character if they were to move upwards.

While Scar's version isn't necessarily based on any game in the Metroid franchise, it does appear to use background sprites of the area where Arachnus-X's can be found from Metroid Fusion, suggesting that the stage takes place there, though the stage floor and its connecting elements are using sprites of some of the backgrounds seen in the game's Sector 2. The fully grown baby Metroid can be seen in the centre of the stage with what appears to be snow falling behind it, which seems unusual when the canon of Metroids being naturally weak to cold temperatures is taken into account. The stage's background moves slowly from left to right, though the likely intended effect is that the floor combatants fight on is moving, which is hard to envision when the falling snow does not follow the movements of the background. Due to the stage's horizontal boundaries being close together, there isn't a lot of left or right camera movement past the stage's starting position, though while it is fortunate that vertical camera movement isn't restricted in the same way, the stage's z-offset placing the stage floor near the bottom of the screen combined with the camera moving upwards with any vertical movement made by the combatants means that it doesn't take much for the floor to drop off the bottom of the screen. 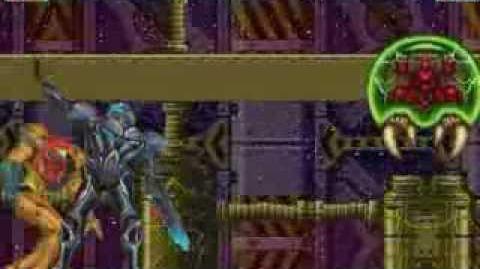 Highly similar in appearance to the creator's first version, Enscripture's second version primarily increases the size of the sprites so that combatants have more room to move around, though a character using a Super Jump will still disappear off the top of the screen despite the camera now being able to follow an upwards moving character. A pulsating effect has been added to the majority of stage elements that makes everything brighter, while the falling snow has been slowed down to match its speed in Metroid Fusion, though an oversight in the tiling effect means that a thin blue line occasionally scrolls down the the stage. Despite the stage coming with two .def files, the differences between the two of them are not extensive, as the .def marked as 'MF-Sub-Zero2' has smaller snowflakes with more of them on screen at a time, on top of certain stage elements having the dimmest part of their pulsating animation be slightly brighter, such as the stage floor and Ridley's frozen husk.

Retrieved from "https://mugen.fandom.com/wiki/Main_Deck?oldid=361963"
Community content is available under CC-BY-SA unless otherwise noted.