MUGEN Database
Register
Don't have an account?
Sign In
Advertisement
in: Articles with missing Images, Characters that use a Palette Selector, Edited Characters,
and 13 more

Gudine's version of Futo uses sprites and moves from Urban Legend in Limbo, and has gameplay based on RicePigeon's characters. Futo's main trait is her ability to set plates on the screen, later being able to power up or change certain attacks she possesses, as well as use the amount of broken plates to power up one of her attacks.

, when used combined with

acts as a shortcut for the character's

is used as a shortcut for Ⓨ

is used as a shortcut for

, used in the Level 3 Hypers. At the beginning of the match, Futo must select from one of two mutually-exclusive Level 3 Hypers; *Even in Death, One Plate is Still Missing!* is a long-lasting throw that deals decent damage, while Fate "Gate Opening For Catastrophe" makes random objects fall on the opponent if they're near when activated.

Futo is capable of setting plates on the stage during battle, using either [

or Wind Sign "Miwa Plate Storm", all of which double as damaging moves; after at least a plate is on the stage, Futo is able to use (and afterwards destroy) the set plates as part of Liuren Holy Fire (where it homes on any existing plate), Wind's Ominous Hole (where it makes Futo fall onto the newest plate on screen), Plate Sign "Combination Wind" (where it sucks set plates to become bigger) and Fate "Gate Opening For Catastrophe" (where it destroys all set plates, using the amount of plates as a power scale); once destroyed by certain moves, Futo's plates will be added to the broken plates counter, which serves as a scale for Okiku Uppercut's damage (though the damage reaches its maximum at 9, not 10).

Although Futo has decent movement speed, her attacks are partially slow, a trait somewhat compensated by her above-average range in attacks such as her aerial and ground Ⓩ

. Prior to setting any plates, Futo's only way of counteracting projectiles is through Liuren Holy Fire which can prove to be difficult during projectile wars; Even if Futo did set a plate beforehand, Wind's Ominous Hole, her other plate-interacting Special, can be easily foreseen by the opponent and dodged accordingly.

Futo has no custom A.I., and thus uses the engine's default, performing random attacks and often grabbing the opponent. It often jumps around and blocks and doesn't perform Specials and Hypers often. At the beginning of a match, the A.I. selects a spellcard randomly.

This character uses a Palette Selector that allows for more than 12 palettes to be chosen, and as such, only the first 12 are shown here. For a full list of palettes, see Alternative palettes.
For each palette in group 1 listed here, this character also has a corresponding palette in group 2. Palettes in group 2 are simply mirrors of their group 1 counterparts, used to simulate the asymmetrical color scheme in the character's sprites when the character is facing left. 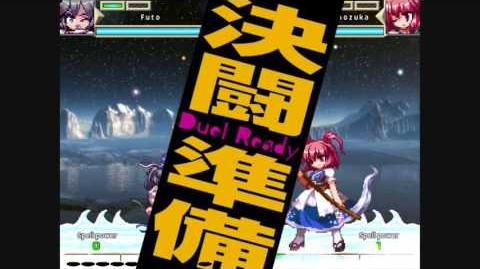 MugIne A hermit's life is tough... 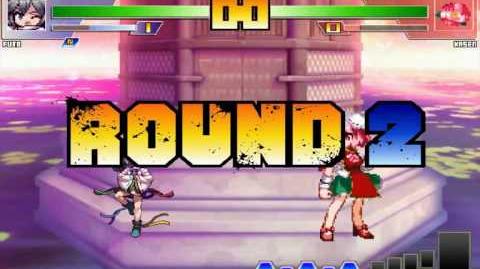