Project Catch 'Em All is a Pokémon-themed full game by Ryon, Alexei & Txpot created using the M.U.G.E.N engine. It combines elements of fighting games with the traditional RPG-based gameplay of the handheld Pokémon games, as well as including an active time battle (ATB) bar commonly seen in the Final Fantasy games.

As of March 27th, 2019, Project Catch 'Em All stands at Beta 4. Although Alexei had previously confirmed that the game was being rebuilt using a completely different engine to M.U.G.E.N in order to allow them to implement desired features that are otherwise impossible to achieve using M.U.G.E.N,[1] thus halting development of the current version, Txpot later stated that development has instead been split into two versions, dubbed System A and System B; System A is the current version of the game built upon the M.U.G.E.N engine, which is now being handled by Txpot, while System B is the unreleased build being developed by Alexei using Game Maker.[2]

Like a traditional fighting game, the player selects a single Pokémon to fight as, which is quite unlike the Pokémon games, where the player usually enters a battle with a team of six Pokémon. Matches consist of a single round, and the Pokémon who successfully empties the opponent's HP bar is the victor. As Project Catch 'Em All is based on the Pokémon series, it naturally takes cues from it, with each Pokémon having a total of four moves to choose from, stats based on what that Pokémon has in the main series and type-effectiveness playing a key part in battles; for example, Grass-types are strong against Water-types, but weak against Fire-types, Fire-types are strong against Grass-types, but weak against Water-types, and Water-types are strong against Fire-types, but weak against Grass-types.

As Project Catch 'Em All is a fighting game environment and not a traditional RPG, game-based stats and type-effectiveness do make the game unbalanced, with stronger Pokémon such as Blastoise having a clear advantage over weaker Pokémon like Meowth, and Hitmontop having a severe disadvantage against the game's final bosses; many of the Pokémon that are weak to certain types do have some sort of coverage move at their disposal, such as Rhyhorn, who has Megahorn to counter Grass-types, which circumvents this balance issue to some extent. A character's stats are taken directly from the Pokémon main series, though because Project Catch 'Em All only has three stats (HP, Attack and Defense) instead of the Pokémon games' six (HP, Attack, Defense, Sp. Attack, Sp. Defense and Speed), the developers chose to use the strongest stats for each Pokémon, so if a Pokémon's Sp. Attack is higher than its Attack, they'd use that stat instead; this again leads to balance issues, as Pokémon like Clefable, whose special stats are considerably higher than their physical stats, get a clear advantage over a Pokémon whose stats are more balanced, but aren't overly high.

To keep the game turn-based like the Pokémon main series, each character has an active time battle bar, similar to the one present in the Final Fantasy series. The bar begins maxed out at the start of the battle, but empties as soon as an attack is used; the bar fills up over time, though the rate at which it does so is determined by the attack used, with stronger attacks causing it to fill up slower and weaker attacks causing it to fill up faster. This mechanic allows for characters with weaker moves such as Quilava to prevent the opponent from attacking if an attack is timed properly, subsequently causing moves that fill the bar up slowly to become more of a risk to use.

An interesting mechanic Project Catch 'Em All has is projectile 'HP', which allows projectile-based attacks to be countered by other projectiles, with stronger projectiles such as X-Scissor being able to take several hits before being 'destroyed', allowing them to be used as an effective counter to weaker projectiles, protecting the user from damage and still causing damage to the opponent.

Electrode vs. Blastoise
Add a photo to this gallery 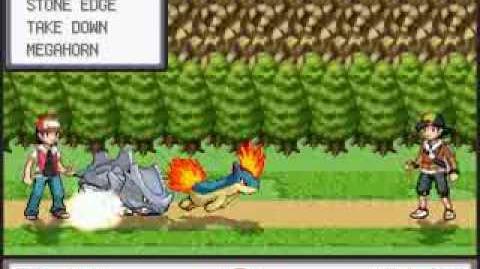 Retrieved from "https://mugen.fandom.com/wiki/Project_Catch_%27Em_All?oldid=376102"
Community content is available under CC-BY-SA unless otherwise noted.