Mewtwo is one of the two possible bosses that can be faced at the end of Project Catch 'Em All's Battle mode, with the other being Lugia. Mewtwo is the most powerful character in the game, boasting high attack (even though it's not based on Mewtwo's actual Special Attack stat) and life stats and a reasonable defence stat, making him difficult to take down. His arsenal of attacks are all ranged and hard to counter, though one should expect such, seeing as Mewtwo is a boss character. As a Psychic-type, Mewtwo has an advantage over Poison- and Fighting-types, but is weak to Dark-, Ghost- and Bug-types. 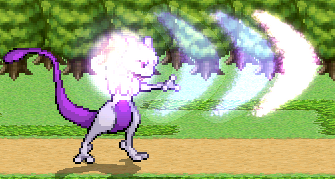 Retrieved from "https://mugen.fandom.com/wiki/Project_Catch_%27Em_All/Mewtwo?oldid=310415"
Community content is available under CC-BY-SA unless otherwise noted.