Rhyhorn is a sluggish but somewhat hardy character; while it may not be the slowest, it's not overly fast to attack and its ATB bar fills up fairly slowly for the most part. Its strongest attacks involve ramming into the opponent, with its Megahorn being able to deal the most damage to Mewtwo out of all other characters' attacks (excluding Hitmontop's Endeavor). As a Rock-type, Rhyhorn is susceptible to Water-, Grass-, Fighting- and Steel-type Pokémon, but is advantageous over Flying-, Fire- and Bug-type Pokémon. 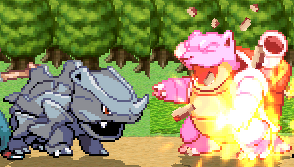 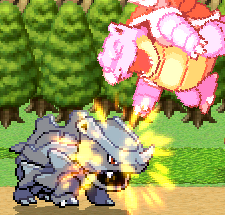 Retrieved from "https://mugen.fandom.com/wiki/Project_Catch_%27Em_All/Rhyhorn?oldid=247060"
Community content is available under CC-BY-SA unless otherwise noted.