Rumble Pack is a M.U.G.E.N game created by Liero. The game itself is not complete and is still in development, the current version of this game is "V1.70".

Rumble Pack is a simple fighting game with a fairly simple play system and a unique art style. All the stages and characters are all created by Liero and all have there own unique fighting styles and pros/cons.

In the current version of Rumble Pack, there are up to 5 characters available with one style each (2 styles for Sofie and Supercut) and two custom stages.

All of these characters are incomplete with some missing sprites and fighting styles, which may be fixed in the future. In addition, when ran in normal Mugen, they have some errors, as their small portraits are oversized and will not display.

There are several unique features which are being used in this game which effects every characters fighting styles. These styles include...

This causes the player to use a more defence style attacks as well as being able to use special defence moves against powerfull attacks. 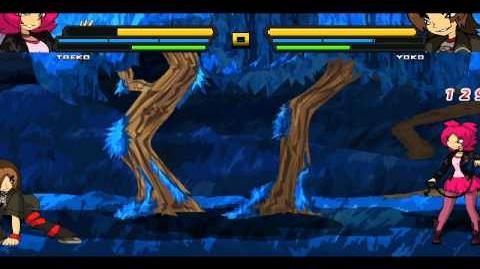 Rumble Pack Combo Preview
Add a photo to this gallery
Retrieved from "https://mugen.fandom.com/wiki/Rumble_Pack?oldid=375715"
Community content is available under CC-BY-SA unless otherwise noted.