SNK vs. Capcom EX is a full game project by Yamori X creating using the I.K.E.M.E.N engine. It is heavily inspired by both the SNK vs. Capcom and Street Fighter EX series of games, with additional elements taken from Darkstalkers.

ES Specials are the equivalent of EX Specials, and cost 1000 Power to perform, but have additional properties. These can be cancelled into from any Normal, Command Normal, or Special move.

Borrowing from Street Fighter EX are Guard Breakers, which are a universal mechanic that costs 1000 Power. As the name suggests, these moves are completely unblockable, putting an opponent into a Dizzy state or juggle state depending on whether they are on the ground or in the air, allowing for a follow-up combo. 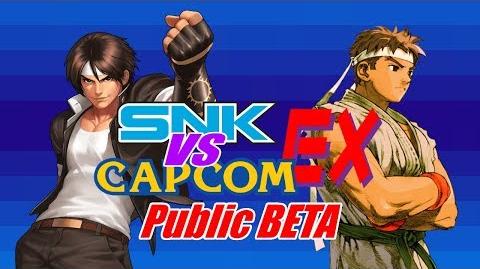 SNK vs Capcom EX Public BETA Released!
Add a photo to this gallery
Retrieved from "https://mugen.fandom.com/wiki/SNK_vs._Capcom_EX?oldid=380416"
Community content is available under CC-BY-SA unless otherwise noted.