MUGEN Database
Register
Don't have an account?
Sign In
Advertisement
in: Article stubs, Articles that need updating, Characters,
and 4 more

This article is about the character. For the creator with the same name, see SpaceMouse (creator).

SpaceMouse is an original character of a small mouse on a quest to find Nazrin.

In M.U.G.E.N, SpaceMouse has been made twice by SpaceMouse, though only one version has been publicly released. Based on what the creator has said, the private version is a joke character that swamps the screen with blocks from the Nintendo DS game, Meteos.

Also known as the "deluxe" version of SpaceMouse, his gameplay is much more fair; he has similar mechanics of blocks being summoned, but the AI is carefully regulated at the rate of how fast blocks spawn. A human player can decide what direction the blocks move by what button is pressed, while in AI mode, the blocks appear in specific patterns. SpaceMouse's AI is simplistic, in that it tries to run away from the enemy, and block when attacked. For the average M.U.G.E.N character, it will take being hit by over 30 blocks to finally be killed. Blocks cause one frame of hitstun, the minimum allowed by the engine, and are considered projectiles.

SpaceMouse has two Hypers; the first creates a large block that slowly moves across the screen, causing damage as long as it is in contact. The second Hyper creates four waves of blocks that move in a counterclockwise or clockwise pattern, depending on which way SpaceMouse is facing when the Hyper begins. Both Hypers use 3000 power.

SpaceMouse's sound effects are almost entirely meant to simulate a Numbers Station. There is no pattern as to which numbers are read. 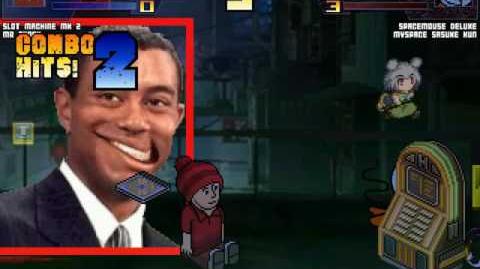