Ultimate Sonic Mugen is a M.U.G.E.N-based fighting game based on the Sonic the Hedgehog series.

This game has characters and stages based on the Sonic the Hedgehog games on the Sega Genesis/Megadrive and plays very similarly to those games. Fights involve collecting powerups and rings and knocking rings out of your opponent.

It is likely that the majority of the characters used are those made by Supermystery, given the aforementioned gameplay mechanics, though the boss characters were made by other authors. While the game could be classed as a compilation, the characters appear to been altered to improve game balance.

Sonic and Knuckles versus Mecha Sonic

Knuckles versus Espio and Vector at the Hidden Palace

When you reach 50 rings, you turn unto your "super" self (or in Tails' case, you get his plane). This ability is only available to Sonic, Tails, Knuckles, Espio, and Vector 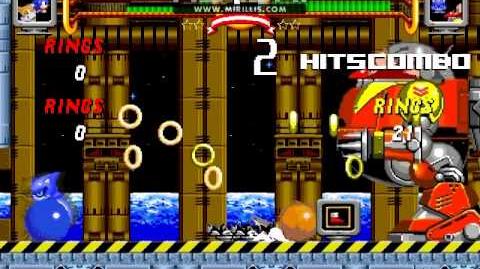 Sonic and Tails versus Metal Sonic and the Death Egg Robot(Mugen)-0
Add a photo to this gallery
Retrieved from "https://mugen.fandom.com/wiki/Ultimate_Sonic_Mugen?oldid=359435"
Community content is available under CC-BY-SA unless otherwise noted.