Uppercut is a character made by The_None that is considered to be unique, due to the fact that it attacks with nothing but uppercut shots, and his sprite usage. Since the character can only perform uppercuts, the move list has been restricted to use the punch buttons in M.U.G.E.N (x, y and z).

Most of the sprites used in Uppercut are those from famous characters who can perform an uppercut shot when played as, such as Ryu (the base sprite), Scorpion, Dudley, etc. The nature of these sprites can also be very random, for instance, when he is standing still he goes through the different game versions of Ryu (from the Street Fighter II game, to the Pocket Ryu ones); When jumping your character turns into a monochromatic Kung Fu Man in his running pose moving left to right very quickly, when running you turn into a grayscale 60's cartoon styled Spider-Man and will also continue to run offscreen and reappear at the other side without stopping until being attacked or thrown, with a similar wrapping scenario occuring while you're jumping. He can also run through the enemy. Uppercut also has random sprites when he is hit and/or defeated, which are not related to any kind of uppercut at all, such as Apocalypse's head, some random words, several Mortal Kombat characters, a Adam Sandler movie case, Commander Keen, and even the Angry Video Game Nerd. When he blocks, he turns into Ice Cube, and Iron Tager.

His attacks have a very unusual nature as some of the most unlikely attacks will end up in a uppercut. Even his air attacks can do uppercuts in a strange fashion, one of them making him do an uppercut sideways, which can lead to an opponent flying towards and bouncing back from the edge of the screen. He also has a strange variation of the Alpha Counter, wherein a monkey would sweep his opponent away.

AI-wise, Uppercut isn't one of the hardest characters to beat, but he can still be a challenge depending on the skill of the player and the character used. 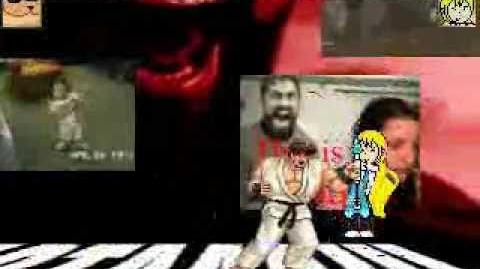 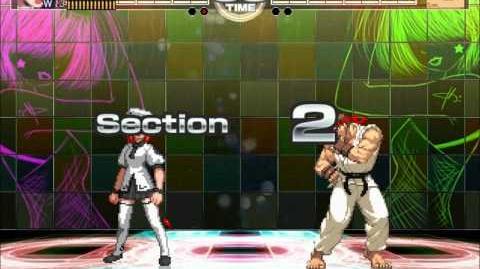 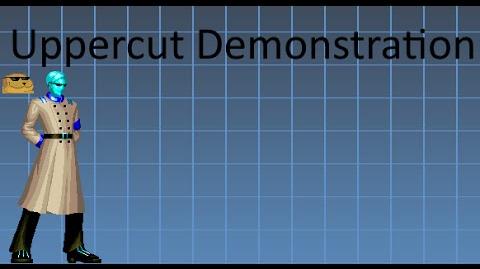