Carrying a parasol, a sadistic flair that invokes fear in her opponents and what might be a layer of body armour underneath her clothes, this Yuuka is a grappler with increased damage output and physical endurance, though at the cost of reduced mobility. Yuuka may have to do a bit of work in order to approach opponents, but the pay-off lies in being able to throw said opponents to the ground and pummel them into the dirt.

Yuuka Kazami is a three-button character that uses the

buttons for the vast majority of her moveset and the

buttons as shortcut motions for the character's actions that would normally require multiple simultaneous button presses, either to increase the reliability of the activation or bypass potential issues with keyboard ghosting; Ⓐ

acts as a shortcut for the character's forward dash, backwards hop and air dashes when either

is being held, Ⓑ

is used as a shortcut for the Ⓨ

input that's assigned to the character's standard standing and air throws, while Ⓒ

is used as a shortcut for both the

part of the command input that's used in the Level 3 Hypers and the character's Flowers in the Wind Special. One of Yuuka's mutually exclusive level 3 Hypers has to be chosen at the beginning of every match, with "Original Master Spark" being a grab that functions as Yuuka's single most damaging attack, and "Twin Spark" being an unblockable melee attack that can be comboed into, but will only make contact with opponents that are airborne.

Uncharacteristic of a typical Touhou Project character, Yuuka forgoes having ranged projectiles in favor of having a moveset consisting of many throws and various other moves that one would expect from a grappler, which centralises a lot of the character's gameplay into getting up close to the opponent and dealing out sizeable damage with powerful grabs or fishing for a combo. The character has a multitude of methods in which to approach an opponent, with her forward dash being the fastest method of approach, but also the option that doesn't have any offensive or defensive potential, and her Creeping Thyme Special being a grab necessary to cover longer distances; Flytrap is an anti-air option that can stop an opponent trying to get away from Yuuka by jumping over her, though while the heavier versions do move Yuuka forward slightly, the fact that the attack can only hit airborne opponents makes it a very risky move to use against a grounded opponent. Yuuka's standing Ⓩ

normal is unique in that it can be charged by holding Ⓩ

, which greatly increases the move's startup frames but deals higher damage, causes a soft knockdown, makes the move safe on block, and provides Yuuka with 1 hit of Super Armor during startup, making it another tool for safe approach. Thorny Rose and Flowers in the Wind are the two attacks that Yuuka can use to get around projectiles, with Flowers in the Wind also doubling up as a form of rudimentary counter due to the move's short startup time, large hitbox and invulnerability frames, and Thorny Rose destroying projectiles completely should they come into contact with the tip of the umbrella, as well as inching the character forward slightly and being the only Special that can be both comboed into and out of. Fantastic Spring Flowers is Yuuka's only projectile move, which creates a stationary sunflower at a distance away from her; although the hitbox is small and cannot hit airborne opponents, the fact that it can only be blocked low and causes a hard knockdown makes it a good option for Yuuka to trip up an opponent from a distance, giving her time to close the distance and get within grab range.

While Yuuka's combos are extremely limited in scope, the few combos she does have are quite potent and can usually be pulled off with a relative degree of efficiency, usually helped by nearly all combos starting with either an aerial that can be cancelled by landing or the safe on block Ⓧ

can be rapidly chained into itself, it can only be used two or three times before it pushes the opponent out of comboing range, requiring Yuuka to eventually chain it into either the Ⓨ

, or their crouching variants, seeing as she doesn't have the option to chain combo. Yuuka can use the Ⓧ

as an effective means of scouting for her next option, as the attack connecting allows the character to follow up with a combo, while the attack being blocked allows the character to lead into one of her many grabs; however, due to the grabs not being able to connect with an opponent during blockstun, Yuuka has to time the use of these grabs so that the grab hitbox being active coincides with the moment the opponent leaves blockstun, with poor timing leading to the grab not connecting and Yuuka being left open for punishment. While Yuuka's backward dash is hindered by poor mobility, this can be used to Yuuka's advantage to create a potentially unblockable high-low mix-up, allowing her to attack with her aerial Ⓨ

and immediately follow it up with her crouching Ⓨ

, forcing her opponent to react quickly to properly block; depending on whether or not the opponent successfully blocks the mix-up, Yuuka can either follow up with a combo or one of her grabs. Despite Yuuka's sheer damage potential and ability to endure more attacks that a standard character, Yuuka is held back by slower mobility than normal and the constant need to be within close proximity to the opponent in order to land the majority of her attacks, as such, an opponent that is proficient in zoning can keep the character at a safe distance in spite of her tools to get around projectiles; furthermore, a character that can dodge past Yuuka and retreat to a safe distance or teleport away from her will render the character's efforts to approach as wasted.

This character uses a Palette Selector that allows for more than 12 palettes to be chosen, and as such, only the first 12 are shown here. For a full list of palettes, see Alternative palettes. 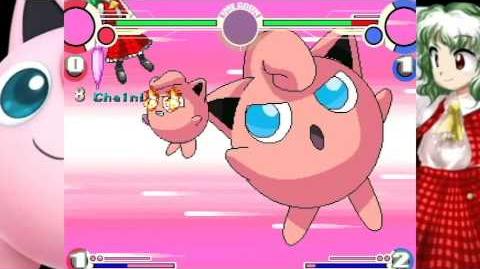 Sleepy Singers and Sleeping Terrors
Add a photo to this gallery

Retrieved from "https://mugen.fandom.com/wiki/Yuuka_Kazami/RicePigeon%27s_first_version?oldid=382265"
Community content is available under CC-BY-SA unless otherwise noted.