Both this version's sprites and gameplay are based on Marvel vs. Capcom 2, coming with different .cmd files to allow for the commands and A.I. difficulty to be changed. Unfortunately, there are several gameplay issues present in this character, such as infinite priority on all of his Normals, unbalanced Hypers and a very unoriginal moveset which contains shoto clone moves instead of moves actually used by Zero.

Zero is a six-button character with a gameplay style based on Marvel vs. Capcom 2, and he has several gameplay mechanics from said game, including a Push Block, an Alpha Counter, a Super Jump and a Launcher which can follow up into the Super Jump. None of Zero's Normals are kicks, with most of them being Z-Saber slashes and a few being punches. He has six different .cmd files, having Normal (N) and Hayato (H) files, with the Hayato files having different commands for the Hypers and one completely different Hyper. Both types have three .cmd files each, denoting the A.I. difficulty, and the .def file can be edited to change the .cmd file used, with the default being Normal with no custom A.I. Zero's grab is activated by pressing either

to throw the opponent respectively forward or backward. His moveset is fairly unoriginal as it contains moves similar to those of Ryu, Ken or Akuma, such as the Hadoken, Shoryuken, Zanku Hadoken, Shinkuu Hadoken and Shun Goku Satsu, which means Zero can be considered a shoto clone.

Zero follows the standard Chain Comboing system, where light Normals can be chained into medium Normals into heavy Normals, Normals can be chained into Specials or Hypers and Specials can be chained into Hypers, though Zero's Normal comboing isn't limited to a series of punch or kick button attacks as some of his punch button attacks can be chained into kick button attacks and vice versa. It's also possible to use Zero's Launcher to launch the opponent in the air then follow up with a Super Jump to perform air combos. To compensate for Zero's comboability, his damage output is mediocre, and he has a damage dampener which halves the damage of a Normal or Special if it's chained from another attack, though for multi-hit attacks, only the first hit of the attack will have its damage reduced. Hypers have their damage reduced by approximately two-third when chained from an attack, even if they're multi-hit attacks, and the damage reduction of any attack doesn't scale based on the length of a combo and is always fixed. All of Zero's Normals have infinite priority due to having attacking hitboxes that extend far beyond Zero's collision hitboxes, giving him very unfair range on his attacks and making it very hard for the opponent to approach Zero, and his standing Ⓒ

Zero has only a few Specials in his moveset, which are the Hadoken and Zanku Hadoken (Zero is able to use both of them while airborne) and Shippuga Fang Sword which is some sort of dash attack; he also has the Shoryuken, activated with the usual

motion, though it's misattributed as a Normal. Zero's Alpha Counter is a carbon copy of his Shoryuken and uses 500 Power instead of the usual 1000. Zero has different versions of these moves depending on the button pressed, though all versions of a given move deal the same amount of damage. Zero's Hypers are slightly unbalanced due to dealing above average damage for their cost, and they also have a long range or are hard to avoid, though they're somewhat unsafe and punishable on block. Zero also has the Shoryureppa as an attack, which is activated with

and is only usable if one of the Normal .cmd files is used, though not unlike Shoryuken, it's misattributed as a Normal in sprite of behaving like a level 1 Hyper. Out of his two level 3 Hypers, one of them is a fullscreen attack and the other is similar to the Shun Goku Satsu, though they both deal roughly the same amount of damage which is slightly less than half of the average character's Life, and because of this, the fullscreen attack is significantly better than the Shun Goku Satsu, making the latter almost useless.

Zero has three different A.I. settings which can be changed by editing the .def file and changing the .cmd file used; by default, he has no custom A.I. and displays the typical behavior of the default A.I., often moving around and blocking while not attacking frequently, making it not much of a challenge. On the Hard difficulty, Zero sometimes leaves itself open to attack but mostly tries to rush the opponent down, which is only made easier due to the range and infinite priority of Zero's Normals and often performs combos which are as long as possible, chaining Normals, Specials and Hypers. On the Very Hard difficulty, Zero doesn't randomly move around and often chases the opponent and traps them into very long combos, often utilizing Zero's comboability to its maximum and dealing a lot of damage in the process.

This palette mode is known as the DX Mode (short for WWE's D-Generation X), available in the seventh palette, and although it's not explicitly stated in the Readme, the eighth palette has the effects of DX Mode as well. The DX Mode allows for certain melee Hypers to be cancelled into other Hypers, and the Power Charge, Sidestep and Long Jump (a jump which is much higher than the Super Jump but can't be followed up from the Launcher, activated with

) are exclusive to DX Mode. Curiously, the Power Charge's Power gain rate becomes faster the longer Zero is charging, though this limits its usefulness because the rate starts out very slow and Zero is vulnerable while charging. It also allows for the standing Ⓒ

moves to be cancelled into the Launcher and allows for aerial Normals to be Jump Cancelled. The seventh palette has a sound effect added to Zero's intros and the eighth has an unique intro. 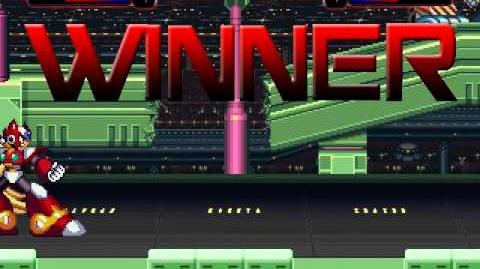 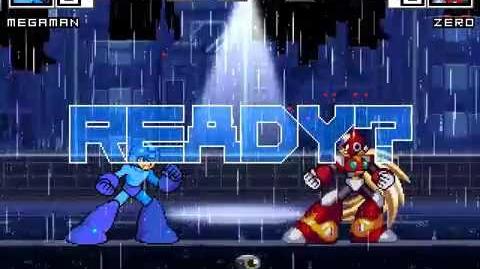 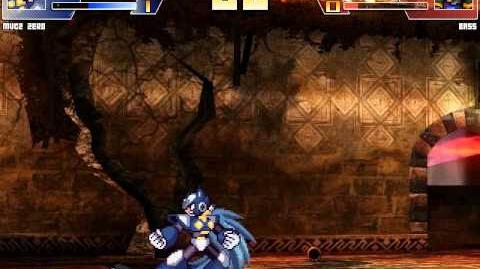 Random Mugen Battle- MVC 2 Zero vs. Bass
Add a photo to this gallery

Retrieved from "https://mugen.fandom.com/wiki/Zero_(Mega_Man)/DarkCipherLucius,_Ddarkbeing_%26_ArielCo%27s_version?oldid=376522"
Community content is available under CC-BY-SA unless otherwise noted.